Chautauqua County is full of family fun — and an easy day trip from Erie!

My 7-year-old son had stood for nearly 10 minutes on the small platform opposite me, about 20 feet up in trees on Peek’n Peak’s aerial adventure course.

“I can’t do this,” he said again, shaking his head.

For the fifth time, he took one step out on the thin cable that separated us. But this time, instead of stepping back again, he took a second step. And then a third. The cable wiggled underneath him.

“I can’t do this,” he said again, his voice sounding breathless.

But he kept going. One step. Then another. The cable shook. He almost fell. But he found his balance and took another step forward. I reached out my arms to him. Just a few more feet and I’d have him.

We were safe at all times, of course, with harnesses strapped to us to make sure we didn’t fall. But despite knowing that, navigating our way through the ropes course at the Peak was, at times, terrifying.

But the feeling the four of us had when we finished? Downright exhilarating. I was so proud of my husband and my kids — my daughter and husband who are afraid of heights, and my son, who is, to say the least, risk-averse — for completing the challenge. Finishing the ropes course was a great end to our family fun day in Chautauqua County — one that had started with our feet on the ground at Long Point State Park.

A Walk in the Woods 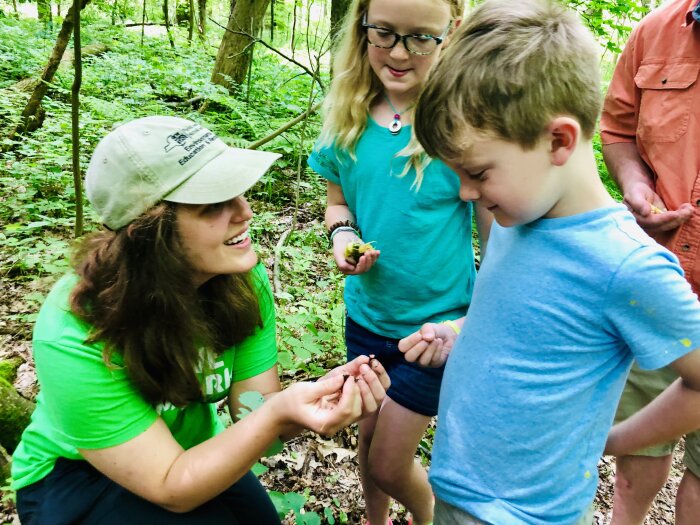 We traveled from our home in Erie to Long Point State Park on Chautauqua Lake in time to meet Student Conservation Association environmental interpreter intern Chandler Dean at 10 a.m. for her weekly free program at the park.

In just a short walk, Chandler introduced us to more than a dozen plants and trees. She entertained all four of us with all sorts of knowledge and trivia about everything from cucumber magnolia trees (the tallest in New York State is rumored to be on this park’s property!) to the medicinal properties of the jewelweed (helps with poison ivy!). Her enthusiasm for the park engaged all of us, as we made our way through the forest, discovering new and interesting plants we’d never have noticed otherwise.

We returned to a gazebo near the parking lot with specimens of flowers, leaves and pine cones we’d found along the way and, with Chandler’s help, created sun catchers out of them — a nice souvenir to take home to remember our time in the woods with her. 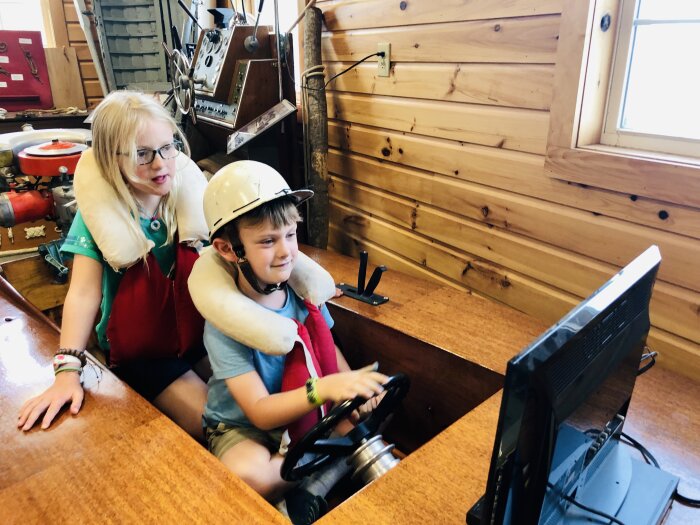 After saying goodbye to Chandler, we headed into town. We’d noticed the Lawson Boating Heritage Center on previous trips through Chautauqua, but had never visited before. We stopped in, and Pat Baldwin volunteered to give us a tour of this fascinating facility, which it turns out was founded in 1918 as a boat chandlery and was at the forefront of affordable family boating on Chautauqua Lake. More than 50 classic restored boats — and even one float plane — are on display throughout the museum. Each one of them is a beautiful piece of art.

The museum has also incorporated plenty of kid-friendly activities on its bottom level. My kids spent a happy hour “driving” a 1940s race boat simulator, playing captain and crew of a real catboat, and building their own balloon-powered boat to take home with them.

By then, we were all getting hungry. We said our goodbyes to Ms. Baldwin and headed outside again. We decided on lunch at the Village Casino, with its deck overlooking Chautauqua Lake. Boaters pull up right to the dock here for lunch, which is always entertaining for us landlubbers to watch. 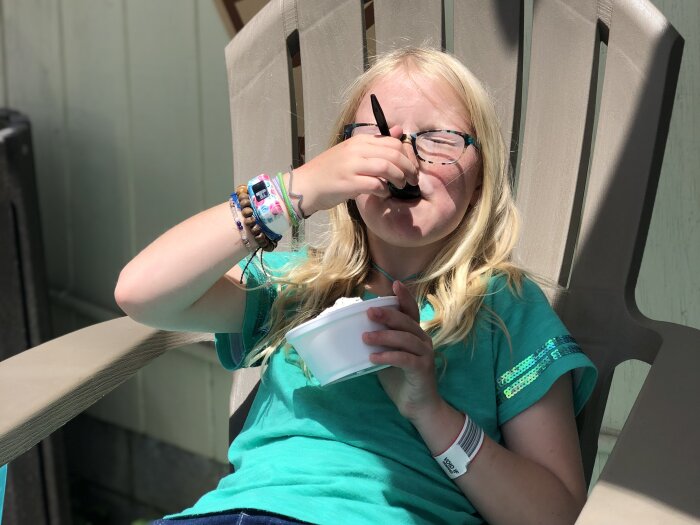 Like the Lawson Center, the Casino also has a storied history in Bemus Point. It originally opened in 1930 and was famous for its big band concerts and vaudeville acts throughout the 1930s and early 1940s. Legendary entertainers such as Tommy Dorsey, Benny Goodman, Count Basie, Duke Ellington, Billie Holiday, Cab Calloway, Lena Horne, and many more — performed here.

Now, of course, the Casino is more well known as a casual restaurant and pub. My kids dived into their hot dog and grilled cheese sandwich, while my husband and I opted for paninis.

After, we decided we had some time do some exploring, so we left our car and strolled along the lakeshore down past the picturesque Hotel Lenhart with its rainbow of rocking chairs, an impressive view of Bemus Bay, and inviting outdoor dining spaces at Ellicottville Brewing Co. on Chautauqua Lake. We stopped in at a few stores — I bought a pair of shoes at Skillmans — before my kids spotted the outdoor ice cream counter at Bemus Point Market. We all enjoyed scoops of Perry’s Ice Cream before heading back to our car and onto our next adventure.

My kids and I had never been to Midway State Park before, and my husband said the last time he’d been there was when he was a kid himself. All these years later, he still remembers how much fun he’d had on the go-karts, so we decided to stop for a spin around the track. We were all charmed by Midway and its character — you feel as if you’ve stepped back in time here, which makes sense given that the park originally opened in 1898.

Visitors can take a nostalgic ride on the vintage carousel, a spin on the tilt-a-whirl or enjoy several other rides. We headed straight for the go-karts, though, and the track was just as my husband remembered it. We each teamed up with one of our kids and raced, the kids giggling beside us as we pressed down on the gas.

We also decided to play a round of mini-golf at Midway's Putt-A-Round Chautauqua, an excellent way to spend an hour as we tried to best each other on the fun course.

High in the Sky at the Peak 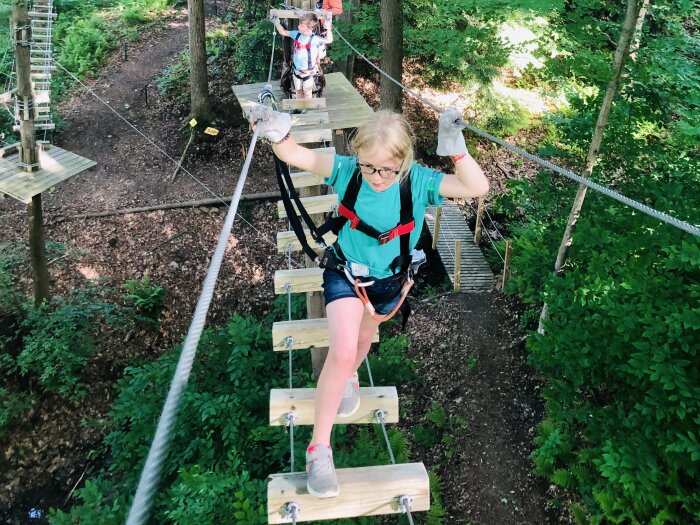 Then it was on the Peak. Before heading to the ropes course, we decided to take a spin on the Soaring Eagle Zipline. We could sit side-by-side with our kids as we soared 130 feet in the air for 1,400 feet. An exhilarating ride, to be sure.

But it turned out to be just a taste of what we’d experience on Peek'n Peak Resort's Aerial Adventure Course. With 69 total obstacles, the eight courses are color-coded, with purple being the easiest and double black diamond the most difficult. Kids as young as five are allowed on the most accessible courses. 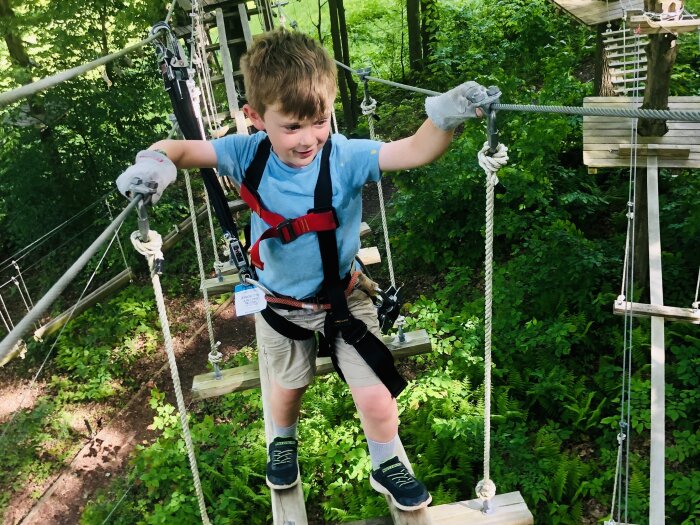 After being harnessed up and a quick safety briefing with how to work the ropes and our equipment, we set off on our own through the treetops, the ground quickly receding below. We hadn’t realized how high we’d be, which, in the end, I was thankful for because I don’t think my daughter, nervous about heights, would have wanted to go if she’d known. We’d chosen one of the courses suitable for kids ages 7 to 9 and figured it would be relatively tame for the whole family.

Boy, were we mistaken. Each obstacle brought with it its own challenge as we moved from platform to platform. But we worked together, were patient with each other, and slowly made our way from one end to the other — truly a team building activity. It took us nearly the entire three hours we were allotted, but we did it — a proud moment for us all that made our day in Chautauqua County unforgettable.