All the Tall Ships Erie Festival Details You Need to Know

The Tall Ships Erie Festival starts today and is truly a can't-miss event! My family has attended two previous festivals and my kids always have a blast. Here are the event highlights you'll want to know:

The festival runs from 10 a.m. to 6 p.m. Friday, Saturday and Sunday. Children under 2 are free. Tickets are available at the festival or in advance.

The world's largest rubber duck -- and her baby! -- can be found inside the festival grounds during the festival. The mama duck towers more than six stories high, is 64 feet wide, 74 feet long and weighs 11 tons.

We happened to be at the bayfront last week when the one-story high baby was inflated: 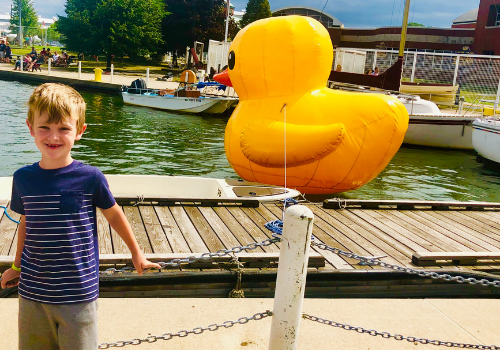 Traffic patterns and parking near festival grounds will be extremely limited (re: difficult!) and portions of Holland Street, State Street and Sassafras Street extension north of the Bayfront Parkway will not be open to general public vehicle traffic. Instead of fighting traffic, festival attendees are highly encouraged to park in the city, then take a parking shuttle down to the festival. Parking passes are $10 each day for the festival at the downtown garages. You can buy passes in advance (and it might be a good idea as Friday is already sold out.) Shuttle services will run from 8:30 a.m. to 7 p.m. between the parking locations and the festival grounds.

Get a FREE weekly calendar of Erie events delivered straight to your inbox each Thursday.